The 5th generation 4Runner is a handsome vehicle already, perhaps one of the finest looking iterations of Toyotas most popular SUV. Of course a lift and some beefier tires not only add to its appearance but also aids in off road performance.  With those modifications already done and covered in other posts on this blog, in this post I will cover two other off road and trail ready preparations that can be made to any vehicle but of course we are focusing our attention on our 2016 4Runner Trail Edition.

Our Trail Edition (TE) 4Runner had quite the array of traction aids when it rolled off the assembly line. From A-TRAC and it’s selectable locking rear differential to it’s now famous CRAWL CONTROL, there seemed to be little terrain that the TE 4Runner would struggle with. Adding to it some larger knobbier off road oriented tires and you can go even further.  Despite the off road abilities of the TE, all vehicles have their limitations.  Sure, everyone likes to think they are unstoppable, but the reality is that everyone is stoppable, and self extraction from tricky and sticky situations now made even more tricky and more sticky because you’ve upped the off road prowess of a vehicle that is not matched or exceeded by many.  Unless you are traveling with a Jeep Wrangler Rubicon, or another vehicle with lockers fore and aft, you will most likely be responsible for getting yourself out, which is why winches are an invaluable piece of kit.  If you are like me and do a lot solo off roading and exploration, winches are simple ‘must have’.  These days winch brands are as varied as their prices. There are the well known brands like the ones carrying the big red W on them, which are great and are among those on the top tier of winches.  My first winch was a WARN because I just didn’t trust other brands.  Why? is a good question for which I have no good answer other than to say that I have gotten over my fear, and did so some time ago. Say what you will about Chinese made winches like that of Smittybilt but I have run them for the last 10 years and have never had a single issue with mine.  There are differences between these “lesser” winches and the top tier brands for certain. They may be a bit noisy because of the cut of the gears, and the may be slower to spool but
they are also half the price, and trust me, when you’re door deep in muck, or buried in 3 feet of snow on a freezing mountain top, the last thing I’m thinking about is how noisy my winch is.

As mentioned earlier, the 5th gen. 4Runner is handsome and to be honest, I didn’t like the thought of totally rearranging the appearance of such a great looking front end. Usually adding an aftermarket winch bumper/bull bar enhances to look of a vehicle, at least in my opinion. One complain that I have  about the front end of the ’14-’16 5th gen 4Runner is that the great looking front facia is 80% bumper.  It has bid plastic cheeks, that Toyota designers masked by adding fog lamps and contoured faux air intakes, easy to do with plastics but not so easy with metals.  Those cheeks aren’t there just because, just behind them are important components that can’t be relocated just anywhere. As a result, aftermarket bumper designers and manufacturers have had a lot to try to work around and little to work with. This has led to some rather homely looking results from manufacturers who normally produce fantastic looking pieces. Although there are some decent looking examples of 5th gen aftermarket bumpers, they are generally huge and heavy. There are some aluminum options that save a bunch of weight but aluminum has a much higher fatigue rate than steel and it’s lifetime duty clock ticks a lot faster.  Lastly, the cost of these bumpers has gone skyward, likely financing the cost of R&D. My first ARB bumper cost, $595 on a Christmas special and my most expensive one was under $900.  I just didn’t like the idea of a $1500-$2000 expense for a big hulking chuck of metal that added gobs of weight and might be something that actually made the front end a little less attractive.

Another option was to just put in a hidden winch mount that sits behind the factory bumper keeping that great looking front end just as it is with no change in appearance other than a small cutout for the winch fairlead. A benefit from a full on winch bumper/ bull bar that hidden winch mount does not offer is crash/animal encounter/trail obstacle front end protection.

I was have a great deal of trouble trying to decide on what to do until I discovered Southern Style Speed and their Slimline Hybrid Winch Bumper.  Their bumper design flows with the original factory lines of the 4Runner, nearly looking like a factory option rather than aftermarket.  It offered a sturdy mount for my X2O 10,000lb winch, and wasn’t ridiculously heavy, but don’t get me wrong this is a stout little bumper.  They also had an optional hoop for some extra front end protection.  While it does not offer full frontal protection, I have no doubt about it’s ability to protect the vital bits of the 4runner in the event of an accident be it another vehicle, an animal or a trail obstacle and at half or in some cases 2/3rds the cost of other options.

Installation was not what I would call difficult but it was not a one man job either.  SSS include pretty detailed instructions, although there are some things I felt were lacking and I will note them.  They also provide a template because you will be cutting your precious front end plastic.
**This will not be an installation guide. I’m only adding some hints where I felt the instructions from SSS may have been a little vague, overall their instructions are clear so I’m not going to rewrite them**
For a reasonably skilled person with some basic tools this job is within the realm of your ability, just pay attention to what you are doing. If you’ve never tackled anything like this before, there are some things that may seem a little unclear in the instructions.  It could be because depending on model, SR5, TE, Limted etc. that the procedure may very slightly from model to model, so be alert and pay attention. There was a 10mm bolt holding the center of the grill on that the instructions did not mention and we didn’t notice it until we tried to wiggle to grill apart.  Again, paying attention here will ensure that you don’t snap your plastic fasteners or other bits. 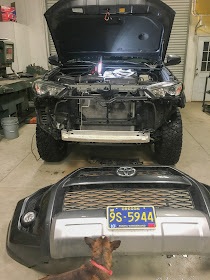 Fortunately since mine was a TE I just needed to trace around the silver bumper cover piece for my cut line. Not to worry, if your cut line is a little jagged or uneven, SSS provide some rubber edge trim to cover your bodywork sins. 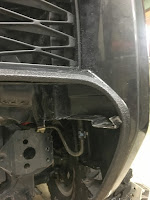 Another area the instructions were a little unclear was this plastic radiator air shroud pieces. there is no mention of cutting them down, and while they could simply be removed altogether easily enough, I like to keep as many things in place as those clever Toyota engineers put there, they were there for a reason.  In the upper left picture you can see how they are stock, with the little foam piece on the end. As they were they interfered with even getting the bumper pre hung.  The bumper hit the plastic and just would not go on. The upper right picture shows it after trimming and fitment was not longer and issue.  The passenger side was far less of a problem but we gave it a little trimming too, just to help out in mounting it that much more, as seen in the lower picture.  Click pictures for a larger image. 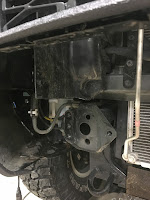 Thankfully SSS had the foresight to add little tabs where you can hang the bumper off the factory frame horns while you bolt it in place. With a winch in the bumper it would be a bit of a bear to wrestle in place and bolt up without them. 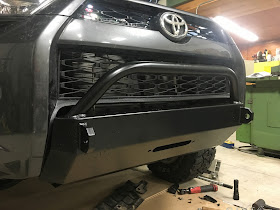 This enables you to make sure things line up to satisfaction before bolting anything up, which we did before bolting the winch and light bar into place.
Once done bolting in the winch and light bar, we set the bumper in place and bolted it up.  I was very happy how it turned out.  We did try to modify the bumper slightly to fit a 30 inch light bar I already had by cutting off the hoop and angling it +10 degrees forward but in the end it was easier to just fit a 20 inch bar instead. Dimensionally it would have fit but created other mounting problems for the light bar.

Lastly and purely for aesthetics I blacked out the grill center bar and badge, not to try and copy the TRD Pro, but it just seemed to tie the whole front end together better. 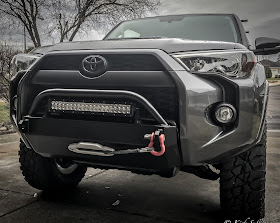 The LED145, A Toolbox in your Pocket – Review

The LED145, A Toolbox in your Pocket – Review

Nomadders Staff -
0
The LED145, A Toolbox in your Pocket At $41.00, the LED145 is an excellent option for those looking to add a robust, functional multi-tool to...

DIY Jeep & Toyota Drawer System for Overland, Camping, and Off...